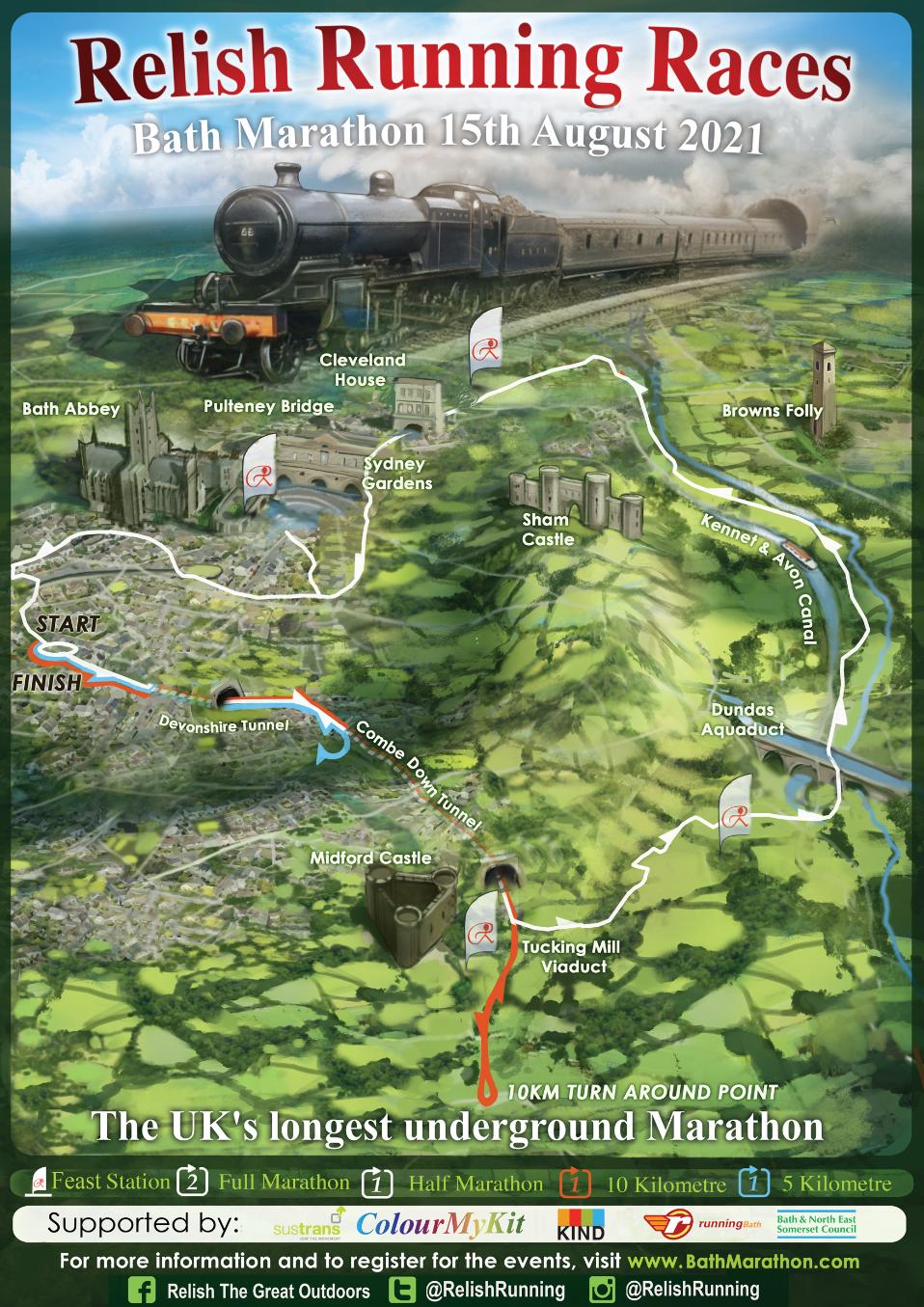 The first mile of the course is on the Two Tunnels Greenway shared path along Linear Park. It is on a slight incline up to Devonshire Tunnel which is the first of the Two Tunnels. Devonshire tunnel is 408m long and is well lit. The course gently curves round to the left through the tunnel. Next runners emerge in Lyncombe Vale and run along the elevated embankment through a very pretty wooded area.

After 1km of running along the top of the embankment it is time to enter Combe Down Tunnel which is 1672m long making this the foot race with the longest underground section in Britain! The Northern side of Combe Down tunnel is 50ft higher than the Southern portal which ensures a cool breeze circulates through the tunnels. The tunnels themselves are lined with a combination of bricks and the exposed limestone rock through which the tunnels were originally bored.

Upon exiting Combe Down Tunnel runners head over Tucking Mill viaduct. Runners turn left after crossing the viaduct and towards the steps to Tucking Mill reservoir. Following the public footpath leads runners onto Tucking Mill Lane past the house of the world renowned Geologist William Smith who produced the first Geologiclal Map of the country. Tucking Mill Lane is not being closed by the race so there may well be traffic along this section. Please be careful, stick to the left hand side of the road, and follow the direction of the marshals.
The roads wind through the pretty village of Monkton Combe following the National Cycle Network Signs. The route runs alongside Monkton Combe School (please stick to the correct public footpaths) and onto a lane which was a track bed of the Bristol and North Somerset Railway which met the Somerset and Dorset Line (the line through the Two Tunnels) in Midford with the Bristol and North Somerset Railway line passing beneath the Somerset and Dorset Line and each line having it's own station.

The route now crosses into the car park for the Dundas and Canal Company and it is here where we are positioning out second Feed Station. This car park will be in use by visitors to the canal and National Cycle Network routes so please be careful and follow the instruction of the marshals. The footpath from here runs alongside the sole remaining spur of the Somerset Coal Canal. This canal served Bath with coal from nearby North Somerset Collieries before it was bought out by the Great Western Railway Company who built the aforementioned Bristol and North Somerset Railway over the line of the canal as a speedier way of transporting coal into Bath.

The Somerset Coal Canal quickly merges with the Kennet & Avon Canal at the beautiful Dundas Aquaduct which is over 200 years old. If you look to your right after the second Feed Station you will be able to see the Aquaduct through the trees. Once on the Kennet & Avon canal the route contours around the hills of Bath through the beautiful Limply Stoke valley. Keep an eye for great sites along the way; Warleigh Weir and Warleigh Manor and Brown's Folly up on the hill top on the right hand side.

The 3rd Feed Station is on the approach to Bathampton just before the stone hump back bridge (near the turning point of the Long Half Marathon and Marathon of the Bath Running Festival routes). The race runs back into Bath through Sydney Gardens with ornate bridges running over the canal. The canal passes underneath Cleveland House, where canal boats used to pass their toll payment through a hole in the roof of the tunnel.

There are a couple of road crossings as the canal descends into Bath to merge with the river Avon. Runners cross over the canal using the bridge over the Lock Gate, the 2nd deepest Lock in the country! (if it is in use we can cross the road - it is a little too far to jump ;-)). Shortly after the canal and river meet and the runners head right along the river bank into the heart of Bath for the 4th Feed Station. The feed station is right on the river, by the world famous Pulteney Bridge and Weir. With Bath Abbey over looking this spot, it may be tough for runners to leave this prettiest of Feet Station stops.

The next few miles are along the river Avon heading pass old warehouses with original crane houses still intact. The route goes under the original railway line of Green Park Station, the terminus of the railway line, which now hosts a variety of small businesses. As the route heads out of Bath there is one final river crossing to complete the loop back into Linear Park and rejoin the route of the Somerset and Dorset Railway. There is a crossing of a potentially busy road. Please use the zebra crossing and follow the instructions of the marshals. Through a couple of streets and the route rejoins the Two Tunnels route in Linear Park. 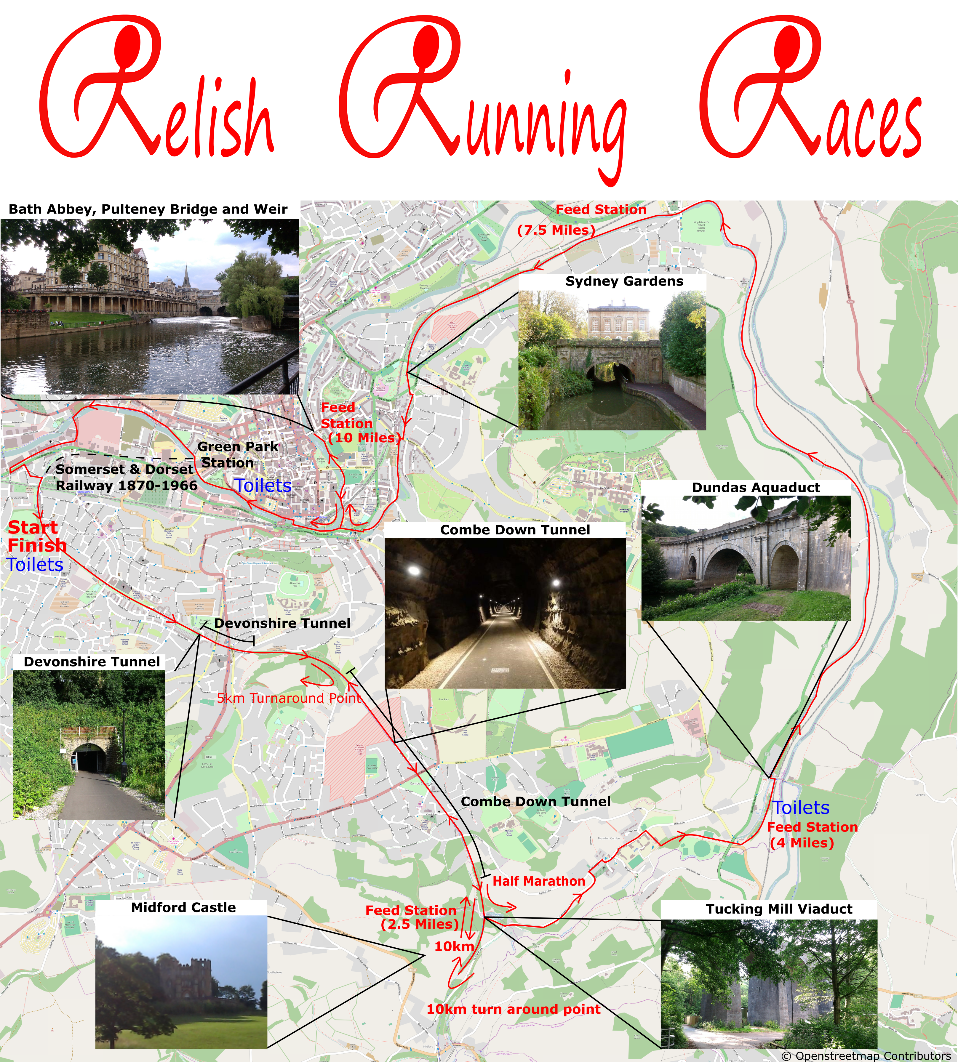